Oh happy day.  The Twins have finally done something right; they traded Delmon Young to Detroit. His hitting this season has not been terrible - right now .266 which puts him on-par with the rest of the team this season.  His fielding, on the other hand, leaves much to be desired.  He is slow, misjudges the ball way too often, and phones it in out there left.  I, for one, am thankful that I won't have to sit through another home game watching Delmon misread a ball off the wall and tubby toddle his way over to it.  Or at least now I won't have to watch him do it in a Twins uniform. 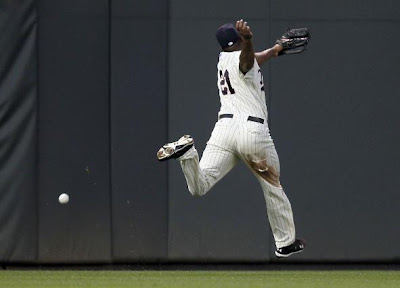 Posted by Minneapolist at 2:08 PM

Minneapolist
Minneapolis: I live here. I work here. I like it here.